Have you ever seen the website Gutenberg.org?  It’s one of the coolest sites on the net.  At Gutenberg.org you can download thousands of old books with expired copyrights, so they are in the public domain and are completely free.  Most of the classic novels are on there: A Tale of Two Cities, Little Women, and the Sherlock Holmes stories to name a few.  But amidst those famous titles you’ll find many obscure gems of literature, like “The Raising and Care of Guinea Pigs”, written in 1915 by one A. C. Smith. 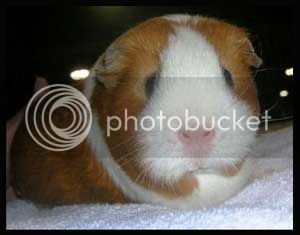 This little book calls itself “A Complete Guide to the Breeding, Feeding, Housing, Exhibiting, and Marketing of Cavies”…the way they did it almost a hundred years ago.  Some of the practices mentioned by the author seem strange, but many are quite the same as we do things now.  The author speaks often about the great profit that’s to be gained by raising cavies and selling them as pets, laboratory animals, and even as a food source.  If you’d like to download the whole book you can do so here:  http://www.gutenberg.org/ebooks/32189

Here are some of the highlights:

Anyone with ordinary intelligence should be able to raise Guinea Pigs

successfully. Women do especially well with them as they require less

attention and work than chickens. Boys and girls find the raising of

for them as it requires no hard or laborious work. Youngsters from 10 to

to them in addition to the money they will make. Parents will do well to

give their children a chance to raise them. To start with Guinea Pigs

does not require a large outlay of capital. By starting with just a few

herd of breeders that are valuable. As each female produces about 15

each, you can readily see there is a big opportunity for profit.

Suppose you begin with six females. In one year they should produce

should be producing before the end of the year. Therefore, it is pretty

get every year about 120 pigs. If sold at a price of 50c each these six

females would be producing about $60 a year. These figures will show you

what 100 females should do.

Most of the [cavy] shows are under the auspices of some pet stock association … A book giving the standards as adopted by the National Pet Stock Association of America can be obtained for 50c from its secretary, C. S.Gibson, 1045 W. Warren Ave., Detroit, Mich.

Note: This “National Pet Stock Association” was founded in Detroit in 1910, and is the organization that the ARBA looks to as its origin.  C.S. Gibson was, in a way, the very first ARBA secretary.

In those days there were only three cavy breeds: the English (which we now call the American), the Peruvian, and the Abyssinian.  The book describes them:

The eyes of all English Cavies should be large and bold. Head and shoulders heavy, nose roman, ears drooping.

In the Abyssinians the rosettes should be as plentiful as possible and the coat rough and wiry.

In the Peruvian the main thing to be considered is the length and silkiness of the coat.

The book names some of the colors that were shown at the time.   There aren’t as many mentioned as we show now, but you will recognize all the ones that it lists:

Selfs.  Solid colors throughout with no odd colored hairs.

Tortoise Shells.  Black and red colors with patches clear and distinct and as nearly as possible equal in size.

Tortoise and White.  Red, black and white patches, each clear cut with no running in of colors. The more patches and the more uniform in size the better.

Other Bits of Interest:

Guinea Pigs ship very easily. They go by express. Use a light but strong

box; in the summer have plenty of ventilation. Wire netting on the top

or sides of the box is good but slats and holes in the sides will do.

In the winter not so much ventilation is needed.

For food use plenty of hay together with some green food or carrots,

beets, etc. No water is necessary. Do not ship out during a real cold

spell in winter or a real hot spell in summer.

Sometimes in spite of all you can do a Guinea Pig goes light. If the

treatment for worms has no effect it may be tuberculosis. Separate at

once from the others. Give special diet of milk and bread or bran and

Cavies sometimes have dragging of the hind limbs. Some say alfalfa will

cause it, but it is usually from some disorder of the kidneys. Give

limbs with a good liniment. Feed carefully for several days and they

will often get over it.

The book apparently ends with an advertisement from a commercial cavy breeder:

For breeding, pet and experimental purposes. Any number, age,

When you have Guinea Pigs for sale, write us, as we are always

in the market. Quote price, giving number, size and sex.

Write me your wants and I will supply you. My =White Kings= are

the most profitable squab breeders in the world, raising

squabs weighing from a pound to a pound and a half. Mature

quickly and always command top price. I can supply mated

pairs. Write me today for particulars and price on pigeons,

Hope you enjoyed these snippets from an old book about raising cavies.  If you would like to see a brand-new cavy book, check out “Cavy Savvy 2-in-1” from Rabbit Smarties Publishers!

Coming next time: the holland lop that won BOB at the 2011 PaSRBA Convention and culling tips from her breeder.